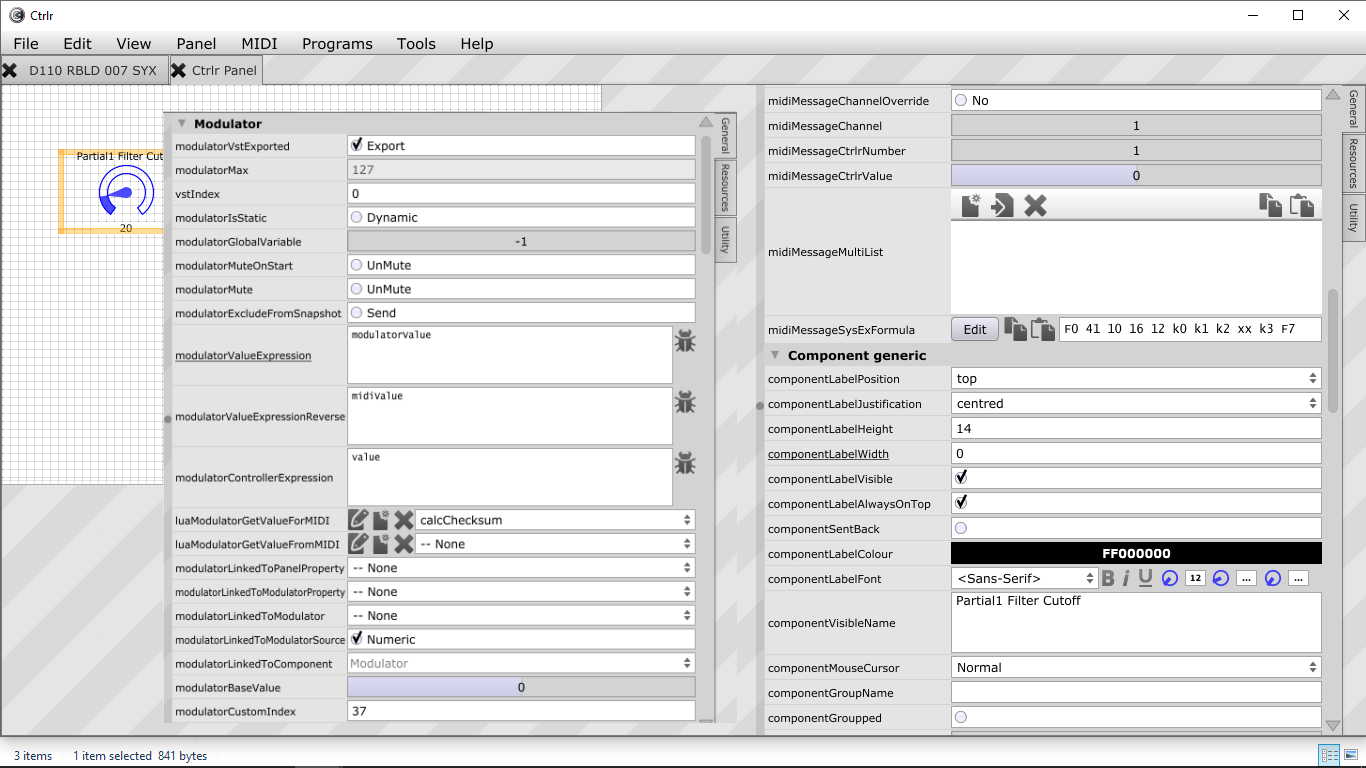 Expression are used to calculate values that Ctrlr sends to the device, and when they return in form of MIDI messages.

To understand expressions we first need to know 2 things:

The lifetime of a modulator, when we look at it as an object that links a parameter in a synthesizer can be split in two “sending” and “receiving”.

Remember, a modulator can have many other functions, but this one is the primary function. A modulator sends numeric values and receives them. In MIDI it’s all about numbers, yes you can transmit patch names, waveform data, but it’s all numbers. What is important it’s always positive numbers 0 – N (n is not really defined, you should define it for every modulator). The number sent by the modulator is actually held in an array, the array is linear, it’s size is N. When you change a component, it tells the modulator about the change, it tells it what new value it should have, let’s say x. When modulator is told that it’s new value is now x, it first looks up the number that’s at position x in the array. If you set up the max/min values correctly for a modulator the x will always be inside the array. Once the modulator has the number it does a bit of processing on it. Few things happen with that number

Once all that is done a MIDI message is produced and sent to the device.

Once the processing finishes, the numeric value received is passed to:
– the associated component (if one exists)
– the plugin host (if Ctrlr is in plugin mode, that will be the actual Host application in standalone mode Ctrlr simulates a Host, so this always happens)

In Ctrlr an expression is a mathematical function with one argument. It does not use any specific programming language to describe the function. It uses a custom parser included in the JUCE library (more information here). ou can use all the basic math operations “+, -, *, /” you can (and often should) use parentheses to group your maths. Along with the basic operation there are some custom functions you can use to get more out of expressions. Also there are variables in expressions, those variables are named and reflect the state of the panel.

A basic expression is a constant for example:

That is a valid expression, this would cause any modulator to send the value 13 no matter what it’s state was.

By default the expression is defined as

This defaults to the current value of the modulator as described by it’s properties and the properties of a component attached to it. No logic is applied, no functions executed.

We can easily combine the two:

This will cause the modulator to send it’s value with 13 added to it always. How is this useful ?

Let’s take the panning example (we’ll assume that we are dealing with MIDI CC messages), we have a parameter that has a range of visible values from -32 to 32 while using range of MIDI values 0 to 64, we need to create a slider that will represent those visible values in the user interface (in form of a Slider) while sending the correct range of numeric MIDI values ranging in 0 to 63 (64 values).

First we’ll set our slider to have it’s minimum value of -32 and maximum value of 31 (why not 32?, well you get 32 values from a numeric range of 0-31, but it might be different with every device), that’s the easy part. With that range applied, the slider will spit out bogus data when setting values from -32 to -1. Once the slider reaches 0 it will start to behave correctly, but it will actually send data for the “left” part of the stereo spectrum, never reaching the “right” (we assume -32:-1 is left and 1:31 is right, 0 is center). Let’s change the expression to

Let’s move over to the “reverse” part, most of the time this part will require some knowledge of MIDI. Since we are dealing with MIDI CC and we are not dealing with numbers larger then 127 we’re safe. We assume that our MIDI device will respond with CC messages that have value 0 – 63. Let’s change our “reverse” expression to

What happens now ? When a modulator receives a MIDI message that’s intended for it. It will take it’s numeric value (in some cases the actual value may be the controller number if defined, or some other part of the message) and process the expressions, that is for any value that it receives it will subtract 32 and the result of the subtraction will be passes to the modulator, making it the new value. One very important thing in the reverse expressions is that they happen on the MIDI thread (or the Audio thread if the MIDI messages are coming from the Plugin Host), so keep them simple where possible.

To do more complex maths, Ctrlr provides some basic math functions and some logic-like-functions (basic if statements) that can help you. Also there are some constants that represent certain values in the panel, those can help you make your modulator values depend on the panel state. Some constants are not available in both forward and reverse expressions. Here is a list:

4 thoughts on “Expressions in Ctrlr”